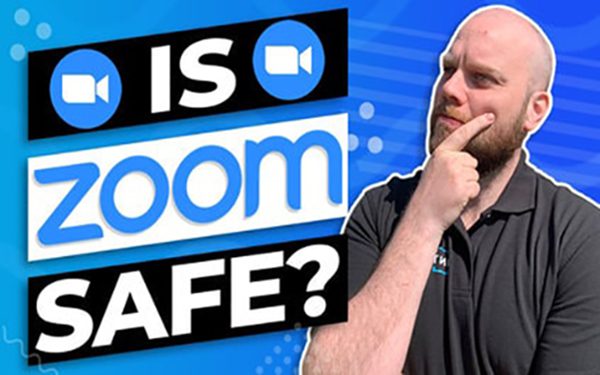 Video conferencing really took off last year, but after experiencing some Zoom security issues, the question many businesses were asking was simply, ‘is Zoom safe?’. Many of the initial Zoom cyber security concerns for businesses have since been addressed and rectified, or features have been added to combat them. So, with that in mind, is Zoom safe for your business now, more than a year and a half after it became a global phenomenon? [youtube https://www.youtube.com/watch?v=pJMFllWKWqc]

By early 2020, as the global pandemic suddenly made remote working a necessity for a large swathe of the population, businesses needed to find a way to communicate with staff, partners and customers, and fast. Zoom, as a user-friendly video conferencing platform, skyrocketed in popularity and became many businesses’ go-to. The British government even used it for remote cabinet meetings. The free version allowed users to host a 40-minute meeting for as many as 100 participants – what’s not to love? In December 2019, before we started working from home, Zoom reported that it had 10 million daily meeting participants. Fast forward just five months, and it had acquired 300 million daily participants. That’s a huge rise.   However, with the increase in Zoom’s popularity came an increase in scepticism. People became concerned about Zoom’s security issues and privacy. So we thought we’d take a look at answering the question ‘is Zoom safe?’.

The first thing we want to address is Zoom-bombing. Yes, it’s a thing! In essence, Zoom-bombing is a Zoom vulnerability wherein people who aren’t invited to join a meeting gate-crash it, often with mischievous intent. Take the Zoom meeting arranged for fans of the BBC4 series the ‘Archers’ for example, when an actor from the programme had arranged to surprise his fans. Unfortunately, the meeting had to be abandoned after it was Zoom-bombed with pornographic, racist and otherwise obscene images. Zoom-bombing took off as people got bored of sitting at home. Zoom meeting IDs were shared in online forums, and the prank results were posted on TikTok and YouTube. Some people found it funny, but for anyone trying to have a serious meeting, such as in a corporate environment, it was not helpful and further raised Zoom security concerns.

Another potential Zoom vulnerability is its encryption. Zoom had long since advertised that it offered end-to-end encryption in its product. In simple terms, this means that communications cannot be intercepted and decrypted. But, unfortunately, when an independent security company tested this end-to-end encryption, it came out that a much lesser form of encryption was actually being used. So, if you love Zoom, how can you use it securely?

In April 2020, Zoom did release an update to face the Zoom security concerns, correcting the encryption issue so that it offered actual end-to-end encryption. Then, in September 2020, Zoom announced further significant security updates, including the addition of two-factor authentication. This really drives home the importance of ensuring that you keep any software your business uses up to date, as if you don’t, you could miss out on important security upgrades. It’s a good start, but there are more things you could be doing to ensure your security while Zooming to help you stay safe online. The waiting room feature allows the meeting’s host to keep all attendees in a virtual waiting room. They can then choose to admit the other attendees one by one. This means that if there is anyone there who you don’t recognise, you can choose not to let them in at all. Screen sharing in Zoom is a great feature, allowing you to make presentations for meetings or sales. However, in many meetings, you only need one person – the host – to be able to share their screen. One of the newer features to protect against Zoom security concerns is the ability to stop other meeting attendees from sharing their screens. As the host, you can still share your screen if needed, but it means that even if someone uninvited were to enter your meeting, they wouldn’t be able to achieve the same results as the Archers fans’ Zoom-bomb.

Many people looking to host a webinar or talk post a Zoom meeting link to social media or in relevant forums. This isn’t secure and can leave you open to Zoom-bombing and other security risks. Although Zoom is popular for those hosting both meetings and webinars, it’s important to note the fundamental difference between the two. Typically, a meeting is a smaller group of people meeting to collaborate and share thoughts or ideas, while a webinar is a much larger group viewing pre-prepared content. The webinar platform is not included in the free version of Zoom, and you will have to choose from a monthly or annual plan to access its features. If you don’t want to pay for the webinar platform or you’re only looking to host a small talk, you should still protect yourself and those attending against any Zoom security issues. Ask those who would like to attend to register with yourself and then use direct messaging to let them know how to join the meeting.

Should You Pay for Zoom?

Let’s talk about free versions of software in general. They are generally designed to lure you in with a taste of what the platform offers. However, the paid versions of the software usually contain more features and controls to help you stay secure. This is the same with Zoom. Zoom can be a really useful tool for your business, keeping your remote and office workers aligned. If you think the platform is the way forward for your business, it’s worth investing in the paid version to access the extra features and security.   So, is Zoom safe? The answer is yes, it can be – but it’s important to make sure that you use the paid version, update it regularly and tweak the settings to protect against any potential Zoom security issues. If you’re concerned about your business’s video conferencing cyber security, please contact Integral IT today – we offer independent consultations and assessments to guide you towards a more security-conscious business.

Get updates and learn from the best

How Quickly Should Your IT Problems Get Fixed?

IT Problems are probably one of the most frustrating things that can happen within your business. What are you to do when you’ve got deadlines to meet, or you’re working from home and can’t access anything? Are you then expected to contact your IT support and wait? How long should you wait? The answers to